I've uploaded a link to my Ignite Talk on my Tumblr which will bring you to an unlisted YouTube video of my talk. I've made closed captions available to serve as a transcript and for those with hearing impairments.

I'm going to teach the basics of Penny Boarding. Sadly, I don't know how to do tricks and I'm not going to learn now because now isn't the best time to go to the hospital.

Here is the link to the Tumblr blog that I'll be uploading my content onto. I think it'll mostly be videos since it's pretty difficult to explain how to do that, at least for me.

What Goes into Good Teaching

I think a lot of things make a good teacher. Since different people have different preferences as to what they think makes a good teacher, you have to be able to adapt to each student's needs and learning styles. So I guess adaptablity and approachability are the most important traits. Having approachable teachers have made a huge difference in my learning. I'm not as afraid to ask questions which can be scary or talk to them which makes me want to learn more and be more invested in the class. Being able to adapt to unexpected circumstances as for an entire class, like what we're doing now, or adapting to an individual student's circumstances and learning/knowing how to help them best.

Salve! (greetings!) The vocab that I've learned from the textbook was not really conversational Latin which makes sense since it's not a spoken language anymore. Instead, I learned more war vocab and vocab dealing with Roman culture. It was kind of weird for me to not learn how to have a conversation as I did Spanish, but I guess that wouldn't be very useful. I know basic greetings.

If I were to travel back in time, I could speak (terribly) about war and violence, but not about the weather or basic things like that which is odd. It makes sense though because Rome was quite violent and they mostly wrote about war and such so it'd be good to learn about what they were most interested in if one were to pursue Latin to make it useful to them.

This has been a pretty cool experience and now I know more than I did before. I don't think I'll continue to learn Latin after this because it gets super complicated and I don't really have the patience for that. Also, I want to try to improve my Spanish instead since that language is very much alive and well and I've always wanted to be fluent in another language, but that'll probably take years and not just a few weeks.

I'm pretty proud of myself for being able to memorize the declensions and conjugations for this crazy maze of grammar that is Latin. The ablative noun case was the most difficult for me in terms of application because it doesn't translate very well in English and it forced me to learn some English grammar as well.

I see why learning Latin was and is still seen as an "elite" language. Partly because it's a Western language and we live in a Western society, but it's also a complex language that's quite difficult to master. It would be extremely difficult for me to learn a language like Chinese because it doesn't use the same alphabet as English and the pronunciation is very different.

The fact that this is a dead language really took the pressure off to learn everything perfectly because it didn't feel like I had the eyes of the native speakers on me in a sense. With Spanish, I often feel guilty for mispronouncing words or not knowing some things because I know that a lot of Spanish speakers in the US have learned English. It seems a little unfair that native English speakers have it fairly easy since much of the world teaches English as a second language. Oops, that was a tangent, but anyway... tomorrow's update will be on how vocab learning has gone.

I started by watching a few Youtube videos to get some sort of foundation going. Some of them gave me a bird's eye view of sorts into the language as well as why it was important to learn Latin. Since, it's a dead language, I'm not going to put a huge emphasis on learning how to listen to or speak it. Mostly reading/writing. However, if I still like it by the end, I might continue learning it outside of this class.

I'm using a beginner's Latin textbook I found a free pdf of online. It's so helpful and I'm getting a fairly good grasp on the verbs and sentence structure so far since I'm familiar with Spanish as well. Also, English has some Latin roots which also helps. I anticipate a little more trouble with the noun declensions since neither English nor Spanish does this. The changing of a noun depending on what part of the sentence it is is a lot to think about along with how to conjugate the verbs. I can see why many Romance languages have moved away from noun declesions.

By the weekend, I want to be able to know about half of the noun cases so we'll see what happens there!

Below is a full list of noun declensions. Tough stuff (for me at least), but language fascinates me so this will be a fun challenge. 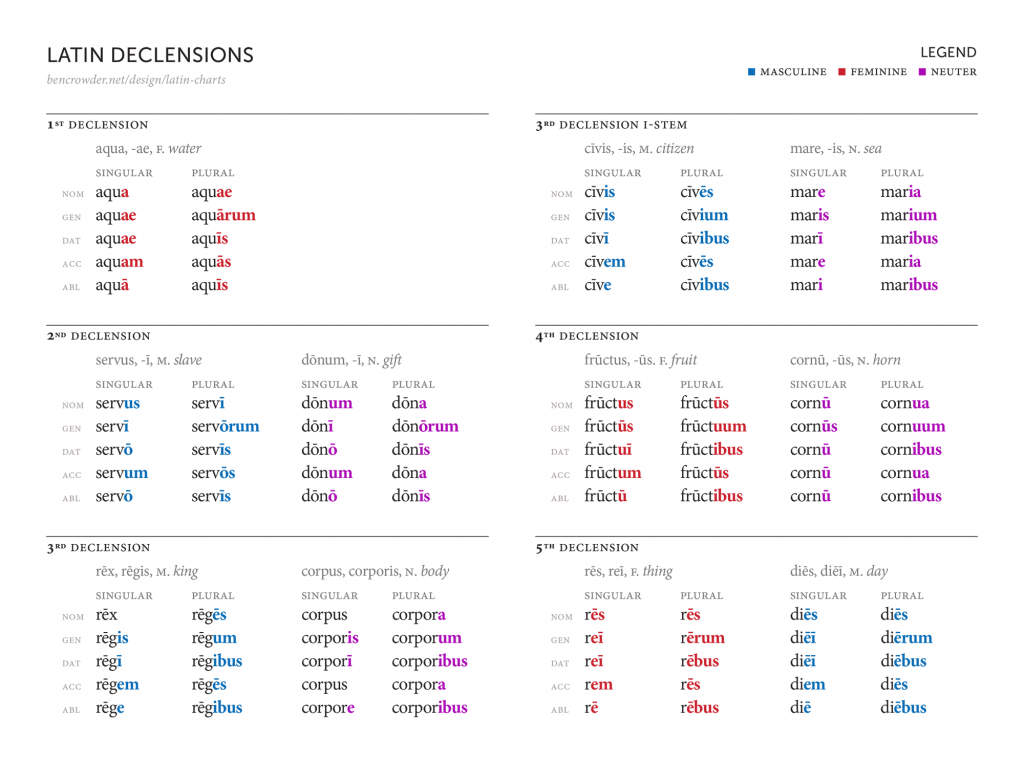 I'm considering changing my topic because I want to challenge myself now that I'm stuck at home. I feel like my old learning objective, while useful, was not challenging me enough and it didn't feel like I was really "learning" if that makes sense. I've always wanted to learn Latin so I might take this opportunity to do that. I know Spanish so I'm somewhat familiar with how Romance languages work. My goal is to learn the main declensions, conjugations, and grammar.

I've learned a few techniques on how to cope with pressing thoughts. I've had to use them because I've been so worried about the sudden switch to going completely online.

1. Make a list of future events that you're worried about. Write what you think will happen/why you're worried and then write what actually ended up happening. (This one has especially helped me)

2. Mentally take a step back from yourself and think about the big picture and if all this worrying will change anything in the long run.

3. Go outside and enjoy the weather. Whether it's taking a walk, going for a bike ride, or whatever, go outside. It's amazing how much your atitude can change in just a half hour of good weather.

The whole COVID-19 thing seem surreal. My folks don't really want me going too far and everything's closed so it feels like house arrest. I try to go to the bike trail every few days to make sure I don't go insane from this quarantine thing. I never realized how much I interact with different people on a daily basis. Seeing all my friends post about how sad they are about having to spend the rest of the semester at home is sort of a reality check. I'm stressed about having to learn online because I have very little experience with that, but I'm sure the professors are a lot more stressed.